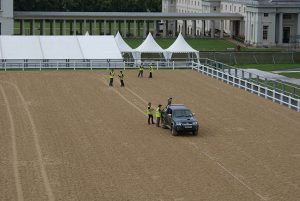 In 2011 RACES were first commissioned to assist the surface providers in developing a suitable surface for the Olympic Games. As information on the unique design of the temporary surface began to unfold it became clear that there was a need to develop measurement equipment capable of replicating a horse landing from a jump in order to measure how a surface on a temporary structure would respond.

In consultation with Prof Mick Peterson from the University of Maine, RACES built the first OBST to be commissioned in the UK. RACES took measurements before and after the test-event and found that there were some issues with surface compaction and moisture content that needed to be resolved. RACES were then involved in the development and testing of new products that would fulfill the functional requirements of the surface for the Olympic Games.