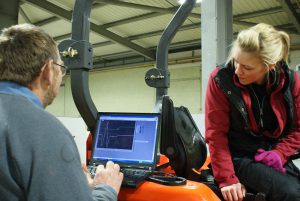 Rider preference appears to be an influential factor in the selection of a suitable arena surface.  The negative reaction of the competitors to the surface used for the Olympic test event in 2011 was sufficient to initiate a change in the surface composition used for the Olympic equestrian events in 2012. The aim of this study was to quantify surface characteristics that riders perceive to be the most favoured in a training and competition venue.

A survey was used to ask riders (n=342) to describe characteristics that they liked about their favourite venue across Northern England.  The two most popular surfaces (both well established wax, sand and fibre) were then tested using the Orono Biomechanical Surface Tester (OBST) and a traction device.  The respondent’s reasons for choosing their favourite venue were associated with the parameters measured using the testing equipment.

The favourite venue was selected because the surface was ‘not too deep or slippery’ and ‘provided good support’ ‘spring’ and ‘cushioning’.  Participants also claimed that both arenas were ‘well maintained’, ‘light’ and ‘airy’.  Traction and peak load and rebound timing, which were measured using the OBST were significantly greater on the favourite surface.

A greater amount of traction at the favourite venue could explain why riders felt that the surface was not ‘slippery’. A surface with greater traction may be perceived as beneficial, however too much grip may exert larger‐than‐normal bending moments on the cannon bone, resulting in injury.  Excessive hoof slide can similarly increase the risk of injury due to the surface not supporting the limb during the loading phase of the stride cycle.

The higher peak loads may be responsible for ‘providing good support’, which participants preferred about the favourite venue.  In order for a surface to support a good performance, it must be able to generate relatively high ground reaction forces however, this is also implicated in increasing the risk of injury.  Participants also mentioned that the favourite surface ‘provided cushioning’.  This has been described in the Equine Surfaces White Paper and is associated with force reduction or lower peak loads, which generates some conflicting perceptions.

A different surface property may have been responsible for the ‘cushioning’ feeling.  Cushioning is also closely related to the responsiveness of the surface or how active the surface feels.  The rebound timing of the surface provides a good indicator of this and may have occurred at a suitable time on the favourite surface to aid locomotion.  If this occurs too soon, it would not assist in elevating the hoof during propulsion and may represent additional force that must be dissipated by the limbs.

These preliminary results reveal there is potential to quantify rider preferences.  It is important to note that rider preference should not be the sole factor to determine the selection of a suitable arena surface due to some preferences possibly being of detriment to the horse.

The abstract can be accessed via this link (p 41):