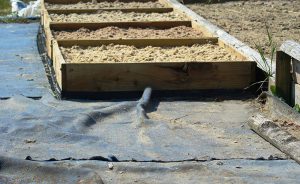 RACES conducted a study using controlled test chambers with two different bases (a traditional limestone gravel base and a base using Permavoid units™ that make up part of the Equaflow system) to investigate three levels of moisture and three different amounts of compaction on the functional properties of the surface using the Orono Biomechanical Hoof Tester (OBST). This created nine unique treatments to be applied to the surface on each drainage system.

All of the treatments initiated significant changes in the functional properties of the surface, some of which potentially generate a risk factor for injury in horses.  Surface moisture content had a variable effect whereas an increase in surface density increased impact firmness and decreased cushioning, but with no change in grip.  The permavoid™ sub-base demonstrated shock absorbing properties and reduced the magnitude of most properties considered to be detrimental to the horse.

A surface should ideally have a low amount of energy lost to the surface on impact and low impact firmness in order to minimize the effects of the surface on the locomotor stresses of the horse.  A surface with a good load bearing capacity is also essential in order to support an optimal performance.  It is generally believed that a surface associated with a higher level of performance also poses a greater risk of injury whereas a surface that has shock absorbing properties increases muscular effort and will be detrimental to performance.  This makes selecting and preparing a suitable surface quite a challenge!

The full article can be accessed here.